Tax Penalties: What You Need to Know 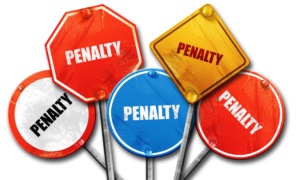 Each year, about 10 million taxpayers are assessed estimated tax penalties from the IRS. The 10 million is a number that has been steadily on the rise in recent years; up 40 percent from 2010.

With a little planning, these penalties are avoidable.

The United States employs a “pay-as-you-go” tax system and tax penalties are assessed quarterly. For the majority of taxpayers with normal wage income, this process has been streamlined through Federal withholding. With the rise in the number of people involved in the sharing economy and contract hires, this process is not as efficient, and the penalties have been piling up. “Pay as you go” is also a cumbersome process for individuals with investment income – such as interest, dividends, rents, royalties, capital gains - and other revenue streams such as alimony and self-employment income.

It is not sufficient to simply recognize gross income for the tax year, but also you must identify how much is owed. While the income streams have diversified over time, so have the number of taxes. In addition to the standard Federal income tax, more taxpayers find themselves subject to the Alternative Minimum Tax (AMT), Net Investment Income Tax (NIIT), self-employment taxes, household employment taxes, additional Medicare tax, and other payroll taxes, among others. Simply put - it is complicated.

Estimated tax payments are normally due on April 15, June 15, Sept. 15 and Jan. 15 of the following year. Any time one of these deadlines falls on a weekend or holiday, taxpayers have until the next business day to make the payment. Thus, the next estimated tax payment for the fourth quarter of 2017 is due Tuesday, Jan. 16, 2018.

If this post increases your anxiety and you would like to elude becoming a member of the ever-growing group of the now 10 million taxpayers subject to the estimated tax penalties, your tax advisors at Sweeney Conrad can help. November and December are a great time to contact your tax advisor to stay current on your tax obligations and avoid the unnecessary penalties and interest from accruing as 2017 comes to a close.  Call us at 425.629.1990.