The SECURE Act: 10 Things to Know About How it Affects Your Retirement 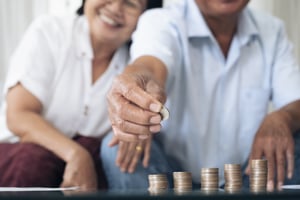 On May 23, 2019 the House voted 417-3 to pass legislation intended to help individuals save for retirement, encourage them to participate in retirement plans, and make it easier for small businesses to offer tax-qualified plans to their employees. The Setting Every Community Up for Retirement Enhancement Act (SECURE Act) passed the Senate December 19th and was signed by President Trump on Dec. 20. It is the largest piece of legislation affecting retirement plan rules since the Pension Protection Act of 2006. Many of the act’s provisions become effective on Jan. 1, 2020 and all retirement plans must adopt the law by 2022. As with any new law, not all of the details are clear yet, but below is a high-level summary of what you should know:

1. The Act will change the age for Required Minimum Distributions (RMDs) from IRAs and repeal the maximum age for IRA contributions.

Several of the law’s provisions help individuals save for retirement. RMDs (required minimum distributions) start at age 72 rather than 70.5, in recognition that people are working and living longer. For those who turned 70 ½ in 2019, the first RMD will have to be taken by April 1, 2020. However, anyone who turns 70 ½ in January 2020, or later, will not be required to take their first RMD until the year they reach age 72. Additionally, the act has removed the age limit for traditional IRA contributions which previously was 70 ½.

2. There will be a 10-year withdrawal period for IRA beneficiaries.

In contrast to the perception of the SECURE act being taxpayer-friendly, the act includes a provision that eliminates the so-called stretch IRA. Previously, non-spousal beneficiaries could pass inherited IRAs over generations, tax deferred. Under the new law, no longer can a non-spousal beneficiary of an IRA stretch RMDs tax-deferred over their lifetime. Beneficiaries of inherited IRAs must now take distributions within 10 years of the owner's death (with a few narrow exceptions). However, if the beneficiary is the owner’s spouse, the RMDs delay until the day the owner would have been 72. A number of our clients have structured their estate plans around stretch IRAs (including IRA conduit trusts); however, under the new law, it may be time to revisit or revise your estate planning strategy.

3. The Act will allow for IRA distributions for adoption and birth costs.

Parents with new children, either by birth or adoption, now have one year from the child’s date of birth, or finalized adoption, to take a “qualified birth or adoption distribution” up to $5,000 from a retirement account. This can be taken without the beneficiary incurring a 10% early distribution penalty. If each spouse has an eligible retirement plan, each can take $5,000 for a combined $10,000. Unless the distribution is from Roth after-tax funds, it is still taxable. Despite not being a loan from the plan, the distributions can also be repaid back into the retirement plan.

The act makes it easier for small businesses to provide retirement plans for employees through Multiple Employer Plans (MEPs) and tax credits. Before this law passed, employers were reluctant to participate in MEPs because the actions of one could affect the whole group if certain requirements were not met. These plans allow small employers to band together and collectively bear the burden of administrative fees, thus reducing the total cost per employer. However, the employers must share some organizational relationship. The idea is to help smaller employers gain access to the same type of plans that larger employers have access to. Under the new law, MEPs would provide more insulation and not result in disqualification in the event another covered employer or employee fails to comply.

The SECURE Act also increased the tax credit available to small employers who set up retirement plans for their employees. Beginning in 2020, the maximum amount of credit available will increase from $500 to $5,000. Costs that qualify for the credit include expenses incurred in connection with the establishment or administration of an eligible employer plan. Depending on your plan administrator, eligible monthly administration costs may be combined with other payroll or HR costs so ask your Third Party Administrator for an annual summary of the retirement plan’s administrative expenses to provide your CPA.

The legislation encourages individuals to participate in retirement plans. Previously, employers could exclude employees from participating in their plans if the employees worked less than 1,000 hours during the year. The SECURE Act enables part-time employees to participate in their employer’s 401(k) plan if they have worked for at least 500 hours per year for three consecutive years. This is effective in 2021 and the part time worker must be age 21 by the end of the consecutive 3-year period.

7. There will be increased contribution limits for plans that allow automatic enrollment.

Furthermore, employees can now contribute 5% more to their retirement accounts if they have a plan that allows automatic-enrollment safe harbor. They can still choose to opt out of this increase, and this can only occur after the first year of participation.

8. Plans adopted by filing due date may be treated as in effect as of close of year.

The SECURE Act allows employers, particularly small employers, to adopt a 401(k) after the close of the tax year but before the due date of the tax return, including extensions. At first glance, this appears similar to how an SEP IRA can be established after year-end. This is beneficial because a small business owner or self-employed individual might be unaware of their net profit and whether or not they could support a contribution to a new retirement plan until after December 31. However, this new provision does not extend the time for employee elective deferrals, but rather specifically applies to employer plan contributions.

Previously, it was a requirement for nonprofit organizations to pay a 2% excise tax on net investment income, which could be reduced to 1% if certain distribution requirements were satisfied. However, starting in 2020, the excise tax rate has been set at a flat 1.39% irrespective of the foundation’s grants/distributions. Adjusting grants to qualify for a reduced rate will no longer apply in the New Year and going forward. In addition, the unrelated business income tax (UBIT) related to qualified transportation fringe benefits has been repealed. UBIT is an additional income tax that must be paid by tax-exempt organizations on income from a trade or business that is not substantially related to the main philanthropic purpose serving as the foundation for its tax-exempt status. One of the provisions of the “Tax Cuts and Jobs Act” passed in 2017 was that employers were required to pay UBIT on qualified transportation fringe benefits, including transit passes and transportation using commuter highway vehicles. This has now been repealed retroactively to when it was originally enacted (December 2017). Organizations affected by this can file an amended 990-PF to claim a refund for taxes paid or incurred after December 2017.

10. The so-called ‘kiddie tax’ changes made in TCJA will be repealed.

The Tax Cuts & Jobs Act (TCJA), signed by President Trump in December 2017, raised the tax rates of children to a level similar to that of trusts and estates, which could be as high as 37%. The passing of the SECURE Act repealed the change and brought the rates back down to where they were before TCJA. The change is effective after December 31, 2019 and taxpayers who paid excess tax in 2018 can file amended returns, seeking refunds.

The above points are a high-level summary and not an all-inclusive list of the 30 provisions within the SECURE act (some of which had previously expired but were retroactively extended). With the passing of the new law, now may be an opportune time to ensure your current or future retirement plan goals are on-track. Please contact your Sweeney Conrad relationship manager if you have any questions about the impact of these provisions or need assistance plugging into our network of trusted client advisors.