What Do Leonardo DaVinci, Abraham Lincoln, The Titanic, Jackie Robinson and your Taxes Have in Common? 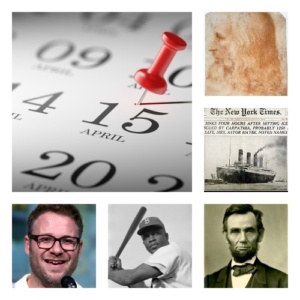 April 15.
This date means a lot of different things to different people. April 15th is the 105th day of the year (unless it's a leap year, then it's the 106th day). There are 260 days remaining until the end of the year.

For CPAs, April 15th is the finish line, the end of "busy season," the date when federal tax returns (or extensions) are due. So why April 15th?

According to Fortune Magazine, it was Congress who originally created Tax Day. On Feb. 3, 1913 the 16th Amendment, allowing Congress to institute the income tax, was passed. Congress soon settled on the 1st of the following month, March 1, as the due date for filing federal returns. In 1918, when the Revenue Act passed, Congress wanted more time in the year to prepare for the due date- and extended it to March 15. Then once more, in 1955, the date was pushed back, this time to April 15. According to an IRS spokesperson, the move "spread out the peak workload." While this is true, there's another, more financially sound reason the IRS wants to issue returns later in the year. "Pushing the deadline back gives the government more time to hold on to the money," says Ed McCaffrey, University of Southern California law professor and tax guru. The longer they hold on to it, the more interest is generated.

So why is Tax Day April 18th this year?
Great question! When April 15th falls on a weekend, the deadline is typically extended to the following Monday. So with April 15th on a Saturday , that would put the 2017 due date at Monday, April 17th. But this year, there’s a catch. April 16th is Emancipation Day, a holiday celebrated in Washington DC only that marks the anniversary of the day in 1862 when Abraham Lincoln signed the law freeing over 3,000. This year, Emancipation Day falls on a Sunday which means it will be observed on the next business day Monday, April 17th. The government can’t ask taxpayers to file on a federal holiday- so that leads us to our 2017 deadline of Tuesday, April 18th!

- The IRS states that 9 out of 10 e-filed tax returns with direct deposit will be processed within 21 days of IRS e-file acceptance.
- For filed returns that are mailed, processing time is 6 to 8 weeks from the date the IRS receives the tax return.
- Want to track you return? Download the mobile “Where’s my Refund?” app from the IRS here: https://www.irs.gov/refunds